W8EDU is currently preparing for WWV100, the 100th centennial of radio station WWV 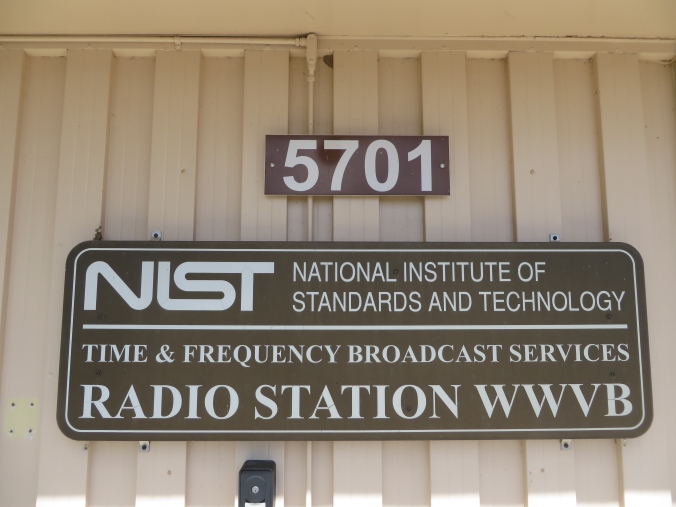 We hope, of course, that you don’t notice that this sign is for WWVB and not for WWV.  They are collocated and WWVB is very cool, too.

Radio station WWV, the time-frequency standard of the Department of Commerce’s National Institute of Standards and Technology, is the longest continuously-running radio station in the world.  Its hundredth anniversary is 1 October 2019, and the Case Amateur Radio Club will be there.

CARC has been using WWV’s signals to calibrate its radio equipment for decades (as has every other amateur and professional station on the planet!).  More recently, it has been recording the Doppler shift of WWV as part of its NSF-funded research in ionospheric physics.  The station uses NIST’s cesium clocks to transmit within part-per-10^17 accuracy and stability; with our rubidium standard and GPS-disciplined oscillators at the station and in the Glennan labs, we are able to measure the received frequency shift with high accuracy.  This in turn permits inferences about ionosphere changes, space weather, electric utility grid impact of solar wind events, and other phenomenon of real concern.

W8EDU’s station clock.  It has an internal radio receiver for 60 kHz station WWVB.

As before, WWVB is not WWV, but we like it, too.

WWV and its co-located sister station WWVB transmit standard time information, also.  This is kept with one second of earth rotation to facilitate celestial navigation, the ultimate backup of a spoofed GPS system.  W8EDU’s station clock, pictured above, shows the watch periods for Morse code (red) and voice (green) in a ship’s radio room.

CARC has participated in the planning for the WWV centennial events and officers will travel to Fort Collins, Colorado 29 September-3 October 2019 for the amateur radio special event station WW0WWV.  We will also be present for the official government ceremonies within the security fence on 1 October, where we will greet NIST Director and CWRU alumnus Walter Copan.

We are also organizing a distributed citizen-science effort, The Festival of Frequency Measurement, for the Universal Coordinated Time day 1 October 2019.  Radio amateurs, shortwave listeners, and others interested are invited to measure WWV’s 5 MHz beacon Doppler shift for that entire day and upload their data files to our central server.  A time and space map of the data will be prepared and presented in publication and conference display at University of Alabama’s HamSCI meeting next spring.  Follow www.hamsci.org for that.

Check wwv100.com for event details, and https://www.nist.gov/pml/time-and-frequency-division/radio-stations/wwv for more information about WWV.

Visit W8EDU to hear the heartbeat of the electromagnetic spectrum, WWV.  Set your clock with us!